The first time I came out to Puget Sound was in my mid 20s. I was interviewing for a reporter position with the Tacoma News-Tribune. I marveled at the size of Mt. Rainier looming over the Sound. My hotel had a wooden deck that allowed me to walk out and look at the big moon jellies bobbing in the blue-green water.

After reporting for a morning (I didn’t take that job), I went out to a recreation area and spent an hour or so picking up jellyfish with a plastic cup and lobbing them back into the water. My hands got only a little bit numb. Tacoma is very beautiful, and whenever I’ve spent time up there, it’s sunny.

Many years later (yes, I’m getting that old), I sailed for the very first time, again in the Puget Sound. My host was Chris Nichols, president of my long-term client Accurate Append. The water was a bit rough so we spent a lot of time under power, but on the way back I got a profile-worthy shot at the helm. I worried over knots and clumsily helped tie the boat at our various docking points. 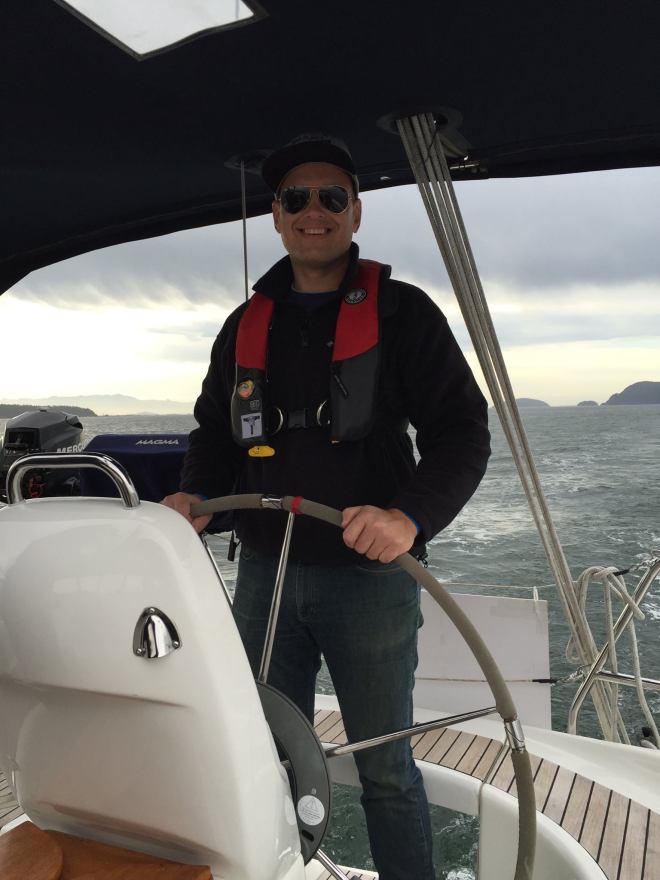 Nothing about my early trips to the Seattle area came close to my experience taking out a 37-foot cruiser for a nearly week-long tour of the San Juan Islands. There are officially 172 islands and reefs that make up the San Juans, but only four are served by ferry. A handful more are popular for boating tourists. With enough time, fuel, and wind, the San Juans are perfect for a sleepy sail. You’ll enjoy beautiful sunsets, admire remote houses built up on the pristine island hillsides, and tie up in tranquil bays and inlets with other sailors. You can also take advantage of one of the many island harbors with fuel for both boats and hungry and thirsty sailors. The best portside amenity after a few days will be the quarters-fed pay showers!

On my first full San Juans adventure, four of us – plus a Boston Terrier! – piled onto the Lucy Jane. With a full larder and three two-man berths, we still had plenty of room to move about above and below decks. I will say, though, that 6’3” doesn’t quite fit well in a sleeping berth – I knocked my head and elbows a few times, and did some gymnastics moving around my partner to get to the head or up in the morning.

I’ll write more elsewhere about what it’s like to go ashore and explore the islands. The sailing adventure is a tale of its own.

On our week-long voyage, we hit Sucia Island, Roche Harbor and Friday Harbor on San Juan Island, Blakely Island Marina, and Spencer Spit State Park. While we motored around a bit due to a couple of unseasoned deckhands (yes, me and my partner!), we also took advantage of good weather to cut half circles between the islands. I kept a close eye on the navigation and depth finder – you don’t want to be one of those discovering an obscure reef! But other than wandering into Canadian territory and getting in trouble with customs, the San Juan Islands are friendly for newer sailors. Our boat was part of the Windworks Sailing fleet, and sailing lessons are available for those who aren’t going out with a seasoned skipper.

Spencer Spit was one of my favorite spots, and, not to spoil my second post, my experience watching tiny hermit crabs in a stream feeding to the beach was transcendent. The longer I started into the pool, the more crabs I could see, like stars on a clear night. Clear night skies are another benefit of sailing the San Juans!

Just a couple hours outside of Seattle and a short sail from Anacortes, the San Juans are a treat that no sailor should miss.

The Puget Sound is one of the nation’s best areas for sailing. Spanning 100 miles from Deception Pass in the north to Olympia, Washington in the south, and averaging 450 feet in depth, the Sound provides prime sailing conditions.

The Sound is easily accessible through one of the many cities on its coasts, including Seattle, Tacoma, Olympia, Bremerton, Poulsbo, Port Townsend, and Everett.

Seattle has become one of the prime launch points for a variety of watersports in the Puget Sound–from swimming and scuba diving to boating and waterskiing. In fact, one experienced sailor described the conditions here:

You can sail in Elliot Bay and explore the Seattle from the water.  There is a great marina conveniently located right near the Pike Place Market. The sound is strewn with islands for exploring, quiet harbors, and services always close at hand. The conditions in the Sound are almost always mild, with some 1 to 2 foot waves building in the longest, open stretches.  It’s almost like exploring a large lake.

Seattle Magazine, in fact, defends the city as a major sailing capital: “nowhere is better than Seattle for beginner sailors to get under way. Around here, there are so many sailboat rental options, it’s easy to hoist a mainsail, heel out and head up into the wind.” Another Seattle-based publication agrees:

The Seattle area boasts some of the best sailing in the US, with stunning scenery and ample wildlife like seals and whales. Combine this with variety of interesting destinations, plus the relatively protected waters of the Puget Sound, and you’ve got a perfect place to get out on the water and learn to navigate your way around a sailboat.

Sailing in the Puget Sound

How to get started

As one Seattle-based publication suggests, sailing classes are a must for anyone without experience:

Sailing isn’t difficult, but all of the jargon and equipment on board requires some learning for the uninitiated. One of the best ways to learn to sail is to find a friend or experienced sailors looking for crew. It takes more than one person to navigate a larger boat, and being a crew member is a great way to learn the ropes, or the sheets, as a proper sailor would call them!

The nice thing about sailing in a place like Seattle is the easy access to incredibly high quality of sailing classes within the city. There are charter services and training classes for every level of sailor or power boater, so you’ll be able to find what you need whether you want to strengthen your skills or gain new ones.