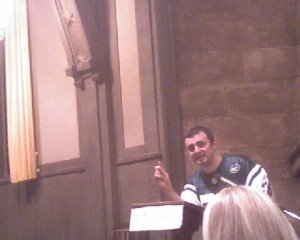 When’s the last time you bought a book for full price? Straight up walked into a local bookstore and shelled out $19.99 or $24.99? If you’re like me, it’s a rare experience.

So it was quite unusual that this weekend I bought two new books, and on topics that I’ve been learning enough about free that I hardly needed them. Yes, I went totally fanboy this weekend when I found out that two social media luminaries were in town. I bought marketing blogger Chris Brogan’s Trust Agents and headed down to a tweetup in San Jose to meet him and get it signed. Then I headed over to Berkeley to buy Gary Vaynerchuk’s Crush It! “Garyvee,” as the entrepreneur is known (pictured at right), signed books for a decent size crowd.

So why did I feel compelled to buy these guys’ books? Especially since with my immersion in social media and Gov 2.0 and the amount of free content Brogan and Garyvee churn out, I probably don’t need the books?

As I looked for Brogan’s book Saturday evening at Barnes & Noble, I found a single copy wedged in next to another social media title. As I walked out of the store, I thought about why I was buying Brogan’s book, and why I was about to meet a friend for an hour’s drive to meet the guy. I also thought about why I wasn’t buying this other book, by someone I’ve tweeted about and could probably meet in the Bay Area for even less effort. And it comes down to this simple fact: Brogan has made the effort to know who I am, the other guy hasn’t. And it’s not me, it’s that Brogan takes the time to organize and remember things about the folks who interact with him on social media, to respond and to teach. If you use social media to reach out to Brogan, he responds.

Garyvee does the same thing. In fact, I think the only reason I connected with him at one point is that someone was tweeting one of his talks and I criticized it. He reached out with something like, “E-mail me, I’d like to know what you think.” Pretty basic, and the guy doesn’t really know me from Adam. But he centers his business model, the whole “personal brand” thing that’s huge in new media, around appreciating people and treating them as important. In his brief pre-signing chat, he said his favorite type of customer is the one who vocally complains, because that gives him a chance to make things right. He pointed out a chat he’d just had on Twitter where he won over a critic of his book.

And he went on to say that he knew the book was going to do well (it has hit the NY Times best-sellers list, as has Trust Agents) because he knew how many people he’d reached out to through Twitter, Facebook and e-mail. People like me who could happily get most of his insights for free were now happily lining up to buy his brief advice book.

So what does this have to do with Gov 2.0? Simply that touches matter. The same affinity that makes me a fan of Brogan and Garyvee can and will endear citizens to governments and officials who show the effort to care (or turn citizens off to those who don’t). Try it. It works.

~Adriel Hampton is a San Francisco public servant and host of Government 2.0 Radio.

One thought on “I Bought Two New Books (and What It Means for Gov 2.0)”